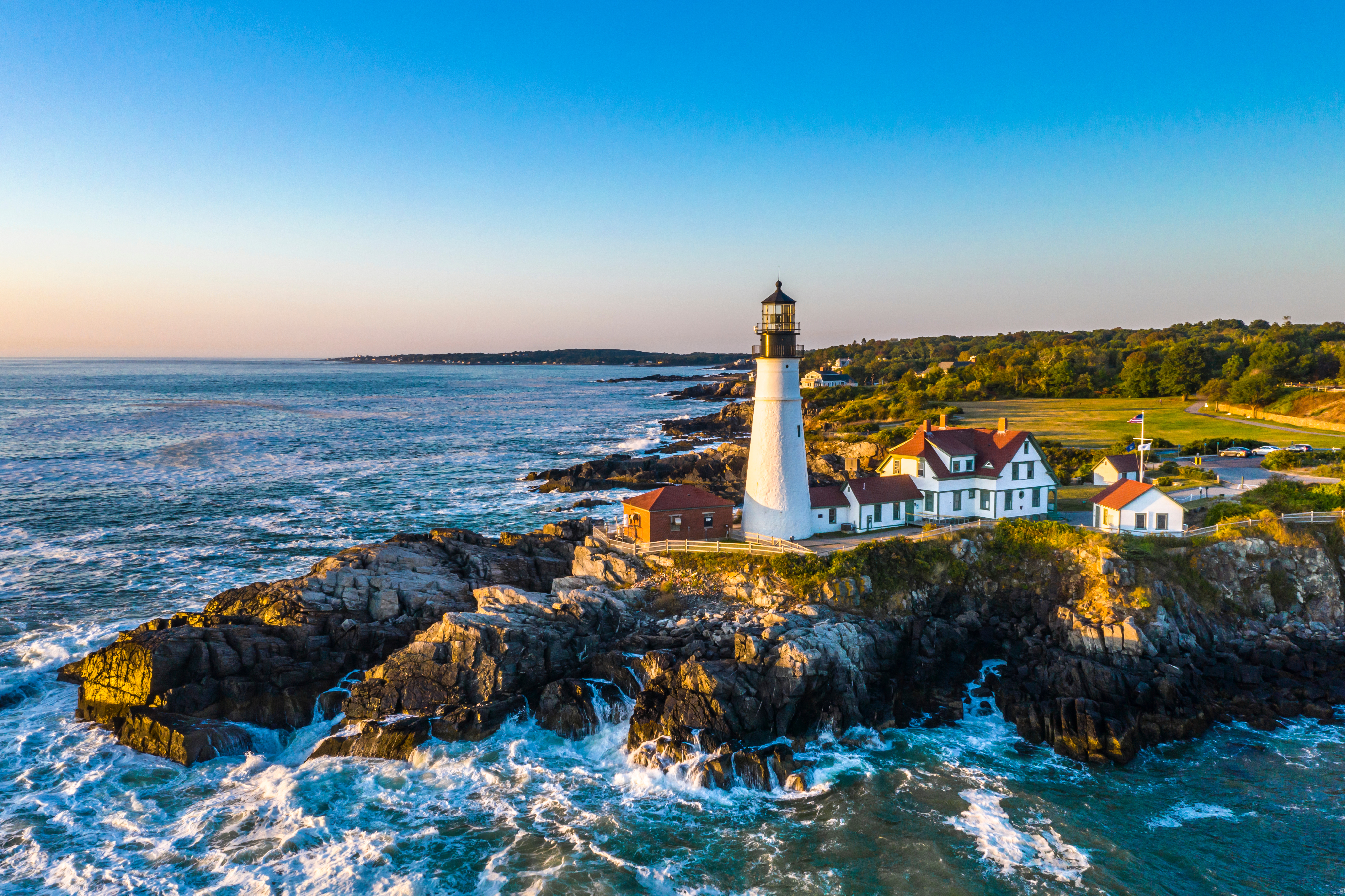 Up front, I’m going to confess to a cheat – the cruising grounds of Maine are far too extensive and varied to cover in the few hundred words we have for this blog every month. So we’re going to give you a taste to entice into thinking about taking a trip to some of the finest cruising grounds the U.S. offers.

The tidal shoreline of Maine is almost 3,500 miles. Loaded with over 4,500 islands, dozens of waterfront cities, towns and villages dot many bays, sounds, coves and channels. The waters are loaded with fish, seals, whales and porpoises. Birds, plenty of birds, and, of course, lobster. It’s a big place, and plan at least two weeks for any trip you plan there, if you can.

Most cruisers coming to Maine stage the trip out of Cape Ann or Provincetown, which are convenient places to break up a longer trip and look for a good weather window. The jump from either place to Portland is under 100 miles, but you may choose to aim further east, making landfall on Penobscot Bay or further east. This makes your nonstop passage closer in the 100-150 mile range, but still less than a day of nonstop sailing for most boats.

No matter where you start in Maine, you can move pretty easily up and down the coast, so heading for Portland doesn’t rule out heading for Mt. Desert Island later in your cruise. You just need to leave enough time, and there are so many beautiful remote anchorages and lovely towns along the way that moving slowly is very seductive.

Coming from Southern New England, it’s still a long trip with an overnight offshore component that requires some planning. If you time it well, you’ll cross Cape Cod Bay and the Stellwagen Bank in the daytime when you may see northern right whales or humpbacks.

Whether your preferences is watching birds and seals in a remote anchorage without hope of a cell signal, or antiquing in towns while looking for the best lobster roll in Maine, every major bay has something to offer. From west to east, here are the major regions with a few details and highlights.

Please note this list is not exhaustive – “smaller” bays like Muscongus Bay or Jericho Bay are sizeable stretches of water in their own right. A good cruising guide and a chart of the area is indispensable!

Fishing is a major industry in every part of coastal Maine. No matter where you stop, you’ll have easy access to world class seafood – either cooked for you or fresh to bring back to your own galley. You can’t get a more fresh lobster unless you catch it yourself.

Casco bay starts near Portland, an interesting and artsy small city with great dining and interesting sights. Throughout the bay, various islands like Peaks, Chebeague, Great Diamond and Long Island have waterfront villages and towns with restaurants and shops to visit.

Other towns include Freeport (home of L.L. Bean), Falmouth, and Freeport.

As you move more east, the islands get more remote and Penobscot Bay has some of our favorite remote spots, even on the populated islands like Vinalhaven and Deer Isle. Notable towns included Rockland, Belfast and Castine.

While Blue Hill Bay is a smaller bay and Blue Hill is a small town, fans of Charlotte’s Web may recognize it as the site of the Blue Hill Fair. It’s typical of the many smaller bays in Maine, with many small, empty and populated islands and a few small towns on the water.

Acadia National Park and the town of Bar Harbor are highlights of any Maine vacation. Mt. Desert Island (pronounced “mount dessert” by the locals) and the national park is crisscrossed with hiking and biking trails, with walks through the woods and up mountains for breathtaking views of the surrounding islands.

Southwest and Northeast harbors are two of the primary places boats visit, but the island has several other nice harbors and you can safely anchor close by the towns. The island has an excellent, free bus system to take you from any of the villages to Bar Harbor and back.

A few offshore island communities like Frenchboro on Long Island are easy sails from Mt. Desert Island for overnight trips.

The further east you go, the more remote the waterfront villages and towns are. You can travel all the way to the border with Canada (and beyond), moving from remote and quiet anchorage to towns and more. While it’s easy to say it’s more of the same natural beauty and rustic charm, but with fewer people as you move east, that doesn’t really do the area justice.

Maine is a magnificent spot for eco-tourism. You won’t have to work hard to see some wildlife like harbor seals. They’ll pop up next to your boat and give you a once over almost everywhere you stay. But you can go to places where there are a lot more of them along with other species in their wild habitats.

Taking our dinghy between harbors on Mt. Desert Island, we almost always came across an escort of harbor porpoises frolicking in our wake. Whales frequent the cold waters off Maine, and you can take a whale watch tour while you’re there. Or you can go out where the whales are found in your own boat, if you know where to look.

Maine is the regular home to four species of seal (harbor, hooded, gray, and harp) and three species of porpoise and dolphin (Atlantic white-sided and short-beaked common dolphins, harbor porpoise). Humpback, fin, Minke, and pilot whales are often spotted offshore, and you may even see a pod of orcas.

Maine has wonderful fishing, with a variety of cold water species which are fun to catch and great eating. Striped bass, bluefish, pollack, flounder, and shellfish can be caught from your boat or dinghy, or collected on shore.

Unfortunately, we didn’t find trolling behind the boat to be a good plan while moving along the coast, since we were concerned about catching lobster pots. Trail a line outside the pot areas for sure, but inshore be careful. Dinghy fishing, or fishing from your boat at anchor, can yield some nice fish.

Eagles, ospreys, terns, and gulls are all over the coast, but there are a few lesser known and harder to see species you can get out to see. You can see the Atlantic puffin from your boat near Eastern Egg Rock, Petit Manan, and Seal Island. Or you can take a tour to Machias Seal Island, the only puffin colony where landing is permitted.

If you get off the boat to look for them, you can find moose, deer, otter, beaver, bear and many other large animals on shore. You may need to consult a guide or rent a car to get more inland, but seeing a moose? I’d do it…

The Hazards of Cruising Maine

As idyllic and beautiful as Maine sounds, it can be a challenging area to sail, sometimes. It’s not dangerous, but there are a few things to watch for when you cruise. A little preparation can go a long way towards easing your travels.

The water in Maine is cold, and the coast is prone to fog. Sometimes it’s spectacular pea soup fog that crawls over a headland like some alien amoeba attacking the coast, other times it’s a thing haze that just makes it a little hard to see. And on our first trip to Maine, we didn’t see a single wisp of fog for two weeks. Probably because I’d just installed a new radar…

Mainers joke about navigating with a bag of potatoes on the deck. Toss the potato forward into the fog, and if you don’t hear a splash…TACK!

But a functioning radar is an immense help. You also want a good fog signal, preferably automated, a radar reflector, and AIS if you can swing it. Many of the smaller lobster boats may not broadcast an AIS signal, but the big boats will, and they will see YOU.

If you come up from the Chesapeake or New England, Maine’s tides may take some adjustment – a ten to twelve foot tide isn’t uncommon in some areas. It’s recommended that some areas you only enter at low tide, because the exposed rocks change the surface of the water so radically.

We got caught on mud flats in our dinghy, and we saw big boats sitting hard aground on rocks that dried out at low tide. So you need to study tide and currents, because big tide also means big current. Make sure you include the tidal swing in your anchoring scope and try to enter more sketchy places at low tide.

The lobster in Maine is plentiful, fresh, and sometimes very cheap. But if you look at floats on the surface, you’d swear the bottom had to be a moving carpet of lobsters because the pots are so thick. Even if you’re careful, you may catch one. A lobster line around the prop can damage your boat and ruin your vacation. And jumping into 65° with a knife to cut off a tangle is few people’s idea of a good time.

Remember, lobster pots are a nuisance to us, but we’re recreational sailors. The pots are the property of hard-working watermen, and a lost float is a lost pot and comes out of their pocket.
And never, ever touch a lobster pot or float intentionally unless it is dangerous to you. Nothing angers a local fisherman more than catching someone emptying his pots, and that’s what you’ll look like if he finds you messing about one.