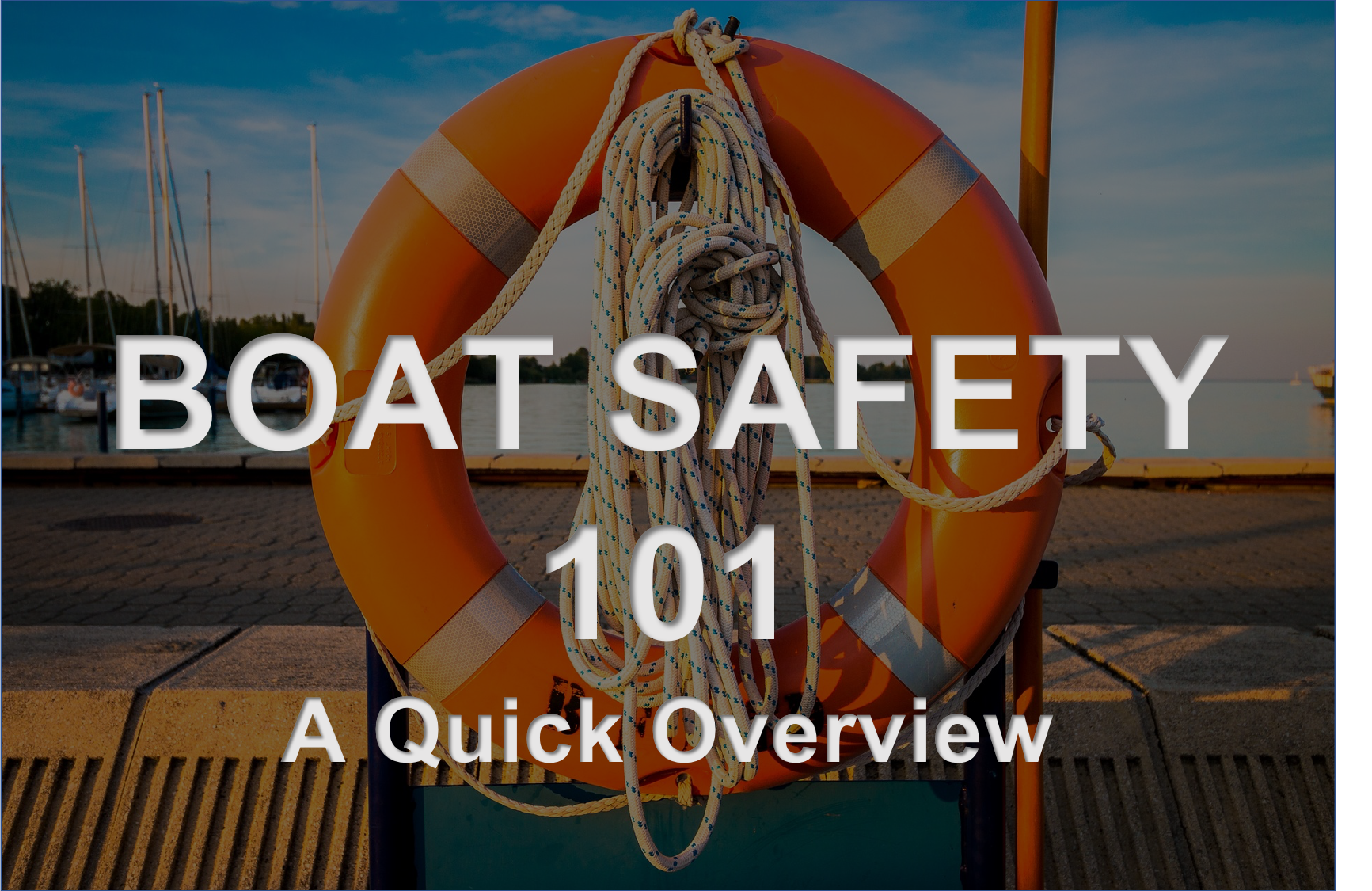 It’s that time of year when once again a young man’s fancy turns to…boating safety!

Yeah, yeah, we talked about it a little last month in the pre-season prep article – the obvious stuff, like check and replace your flares and make sure your Personal Floatation still actually floats.

But good safety preparation goes beyond making a run to a boating store for a new set of flare and a first aid kit. There are some skills, habits, and behaviors you can learn to make your overall boating experience much safer. Preventing accidents is great, but they happen to the best skippers. Being prepared to recover from one with no one getting hurt is just as important.

Practice makes perfect, and very few crews practice their Crew Overboard (COB) drills often enough. Sailors and power boaters have different issues trying safely to recover a COB, so don’t assume what works when you’re out on one type of boat will work for the other.

Even in warm, protected waters, getting an unexpected COB back on the boat quickly is important. You don’t want to risk them getting separated from you, or being hit by another boat in a crowded waterway.

It’s important that EVERY regular crew member know how to get someone back on board. So pick a day with your most regular crews – your family, Wednesday night beer can gang, or fishing buddies, and get out on the water. Pick one or two preferred techniques for power or sail and get out there and practice them.

Rig a big fender with a recovery loop, toss it overboard and learn how to get it back safely. Take turns with every crew member at the helm, and rotate sitting one person out who is “overboard” and can not help in the recovery or even speak. It’s especially important that the skipper take a turn as the simulated COB.

If you have a Lifesling or other similar equipment, take it out and deploy it. The middle of an emergency is no time to be learning a new tool.

A “float plan” can be as simple as telling someone you’re going out and about when you’ll be back. Someone off the boat should always know you’re out there and when to look for you to return.

The USCG has a great float plan you can use, but it is a little intimidating for a weekend trip out to the islands. But you should fill it out at least once and leave a copy with a trusted person. It will have all the information the Coast Guard would need to locate and identify your boat if you’re really late from a planned outing.

Pick someone who isn’t too excitable, and preferable knows a little about boating so they’re not too nervous. Plans change, dates change, and late arrivals aren’t uncommon. Call them if you know you’re going to be late though!

The reason to use the form at least once is your trusted friend may know your boat name and cell number, but they won’t know things like your MMSI number, call sign, and what safety and navigation gear you have on board.

The worst conditions I’ve ever encountered on the water weren’t out in the middle of the Pacific Ocean or sailing offshore to the Caribbean in November. They were on a nice summer weekend, on a six hour sail home from Block Island. So always tell someone you trust you’re going out and when you’ll be back, and let them know when you’re in safe.

While you don’t need to test every piece of safety gear before you leave the dock, you should have some routines to test things out at the start of the season and periodically throughout the year.

Everyone is excited to throw off the dock lines and get on the water at the start of the weekend, so it’s easy to skip the safety briefings for people new to your boat. Just because everyone else knows where things are isn’t enough if things happen fast, the new guests need to know how to get a life jacket.

Prepare a little card of basic information, like where the life jackets and fire extinguishers are. Use this to remind yourself of everything during “the talk,” or given copies to the new guests. You may want to include instructions on how to use the head…

In general, any vessel equipped with a VHF marine radiotelephone (whether voluntarily or required to) must maintain a watch on channel 16 (156.800 MHz) whenever the radiotelephone is not being used to communicate.

There are so many reasons to keep your radio on when you’re on the water, not just because it’s the law.

Yes, sometimes it’s noisy. That’s what the Squelch button is for: a close signal or a powerful signal (like the USCG) will break through. Turn it up until the crackling stops.

That nasty trip back from Block Island we had? We were ready for it, because we were monitoring 16. It was sunny and clear with light scattered puffy clouds, but the Coast Guard was broadcasting warnings about “storm cells with high winds and killing lightning” that didn’t show up in the NOAA forecast we checked. When one of those cells caught us, we knew what it was when we saw it over the water, and we reefed well before the wind hooted over 60 knots.

Unfortunately, we’ve encountered many vessels who were clearly not monitoring their VHF, and had near collisions with some of them that were prevented only by our evasive actions.

When you have your radio on 16:

Pleasure boat operators may optionally monitor Channel 9, instead. That’s not my preference; I usually set the Scan function to monitor 16, as a well as 9 and 13 (commercial bridge-to-bridge), and any other locally useful hailing stations or USCG broadcast channels.

But at least keep it on 16, even if you’ve got the squelch turned down so hard only boats in your line of sight can break through.

How Many Ways Can You Charge Your Batteries? »
« Handy Knots, Every Boater Should Know