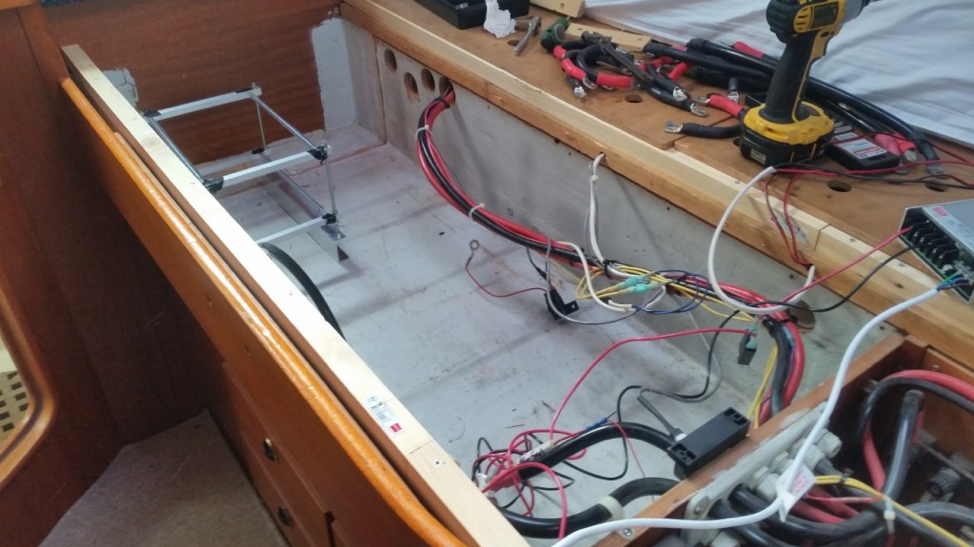 If you haven’t figured it out from my posts to date, the initial battery installation didn’t go as smoothly as planned. There were some speed bumps. A few dips in the road. A couple of potholes. A long, lost meandering in the woods, another in the desert, some epic struggles, blood, sweat, tears, and foul language. Lots and lots of foul language.

But now I sit, thirty-five hours after my last charge, with the batteries resting at 65% remaining. I can live with one percent consumption per hour, that puts me right at the three days between charges I was aiming for.

Arriving at the Marina

The trip up to the marina may have been a harbinger of things to come. With the batteries on a truck somewhere in Australia and a delivery status of Friday, we wanted to make our best effort to be in the marina when the batteries showed up. The fellow that shipped the batteries didn’t think there was much change they’d be there Friday, but the delivery company’s web tracking said that was the day.

Gold Coast City Marina is a fantastic place to do a boat project. There are dozens of marine vendors on site – a chandlery, metal fabricators, electrical shops, shops devoted entirely to stainless steel screws and bolts – a treasure trove for the optimistic Do It Yourself-er embarking on an ambitious project. After we got there, we also discovered they had a courtesy car we could use also, which turned out to be a life-saver.

The Lack of Batteries

What we didn’t have when we arrived was any new batteries. As it turned out, there was some confusion about the shipping slips, and there was one created initially by the shipper and not used, and other one created when he dropped the cells off for shipment. It was the one that wasn’t used that said Friday. We didn’t get the cells until Tuesday. But there were still things to do.

The first step was to figure out how to keep the lights and refrigeration on while we were in the marina with no batteries. One bit of information I picked up from Stan Honey’s notes on his LFP installation was that they picked up a Switched-Mode power supply to run their boat when in marinas. The technical rationale is that LFP batteries do not like to be “float” charged, which is what happens to them in marinas. But a “switchmode” power supply can give a fixed voltage with current sufficient to run the boat’s basic systems.

The power supply was ridiculously easy to set up, and in short order I had the boat running from it instead of the batteries. So over the weekend we pulled the old batteries out and starting puzzling over the Battery Management System and the battery frames. We also had the chargers in a huge, heavy box, but I didn’t want to unpack them because that would then leave this uncrated, awkward thing underfoot and ready to gouge up the interior wood and stub toes. So we left it in the box. This proved a big mistake.

My plan for installation was pretty simple. The LFP cells are much smaller than the AGM batteries they were replacing. With the huge battery compartment, once the AGMs were out there would be plenty of room for the more compact LFP batteries and all the extra wiring and system components needed for the BMS and its contactors and switches. Cake, right?

Look at all that space! You could fit a person or two in there. Well, if they were fairly compact. The metal frame there is for holding one of the eight four-cell groups.

The metal frame in the picture is what we ordered to hold the batteries down and in place. It wasn’t actually what we expected. The framing was different, and it was larger.  The cells were not going to end up in a single tight mass of cells, but instead, would be spaced out by a couple of inches from each other in groups of four. You can’t tell from that picture, but there is not actually room in there for eight of those frames to fit. End to end, four of them were about two centimeters too long for the space.

But worse…when you put two rows of batteries in there, there was not really enough room to work with the BMS components. They weren’t going to fit.

I’d measured this stuff, sketched it out, looked at the drawings…it was supposed to work. But the only possible way the BMS components could go in there would be if I installed them first, before the batteries. And they’d be impossible to reach and service once the batteries were installed.

This was a problem.

My initial thought, and that which eventually worked after haring off after some more idiotic ideas, was to simply shave a centimeter or two off of each frame. There was enough extra to do that and still have them provide sufficient support. So Monday morning I dropped the frames off at the metal shop to be shaved down.

One of the little joys about this project has been the wealth of wildly inconsistent information available about how one should actually do such a project. This allows the inexperienced installer like me plenty of opportunities to agonize over what is the right way, the wrong way, and the workable compromise that I’m going to choose.

One of the tricky things about LFP batteries that I’ve alluded to in prior posts is their voltage. In particular, their lack of change in voltage as they discharge and charge. It changes very little between 80% discharged and 90% charged. Given the sensitivity to overvoltage, it’s important to not overcharge them. If each cell in a bank has a different voltage, the battery charger will stop before the first cell reaches a dangerous voltage. This means all the other cells in the bank will also stop charging, and potentially they will do so well before they are fully charged. If one cell hits 3.5V before another cell hits 3.35V, the lower voltage cell will never get fully charged, and battery capacity can suffer badly.

So the concept of “balancing” your individual cells is an important one. You want to keep the voltages between the cells close. The best way to do this is to start out balanced. So how do you get there?

Well…that depends on who you talk to. My research showed me there was an established (sort of) method to “Top Balance” the batteries to all the same voltage at the full end of the scale. There is also a “Bottom Balance” one can do, but it’s not optimal for a boat bank. This whole topic could be the subject of a 5,000-word blog post that would send most of you running screaming if it didn’t instantly put you to sleep, so I am not going to get into more depth.

But in short, the process I read about speaks to charging ALL the cells to the same voltage at the same time. The trick is in the details. Some suggest doing this on a cell by cell basis. Some suggest wiring all the batteries up in one massive parallel bank and bringing them all to the same voltage together. Where it gets confusing is when I talked to the guy that sold me the batteries, and with the guy that sold me the BMS. They both had entirely different methods to balance the cells that I’d never read about anywhere.

I decided to make one big parallel group of 32 cells, and attach them to a bench power supply. This supply could provide up to 60A of current (in theory) at a specific voltage between zero and twelve volts, exactly. This process would take days, however.

When the batteries finally arrived, I cleaned all the contacts, applied a conductive carbon grease to the terminals, and wired them all up in the battery box in parallel. I plugged in the bench charger and…immediately discovered I’d spent hundreds of dollars on the wrong type of power supply. There weren’t enough knobs.

I’d ordered a power supply which had a knob to set the desired voltage but had no knob to control the desired current. This meant it was a “constant current” supply, which would do everything it could to give max current, including lowering the voltage supplied. This was not going to work since the LFP batteries would suck every amp they could out of this thing and eventually burn it out or lower the voltage too low to make it useful.

Fortunately, I was able to get a power supply with two knobs sent to me overnight, and the balancing could being after another delay of a day.

Once the balancing started, I turned my attention full-time on how the heck I was going to fit all the batteries and the BMS into the battery box. I really, really liked the look of all thirty-two cells in a nice, compact block with plenty of room for the other equipment. That’s how they were for the balancing, and it looked good.

I began to consider doing something to secure them with wood. When I start thinking about wood, it always ends badly.

I’ll leave you there for now though with a cliffhanger…much more to come.

How to Anchor Your Boat »
« What does your boat insurance cover?