Things to Check When Buying a Used Boat (Part 1) 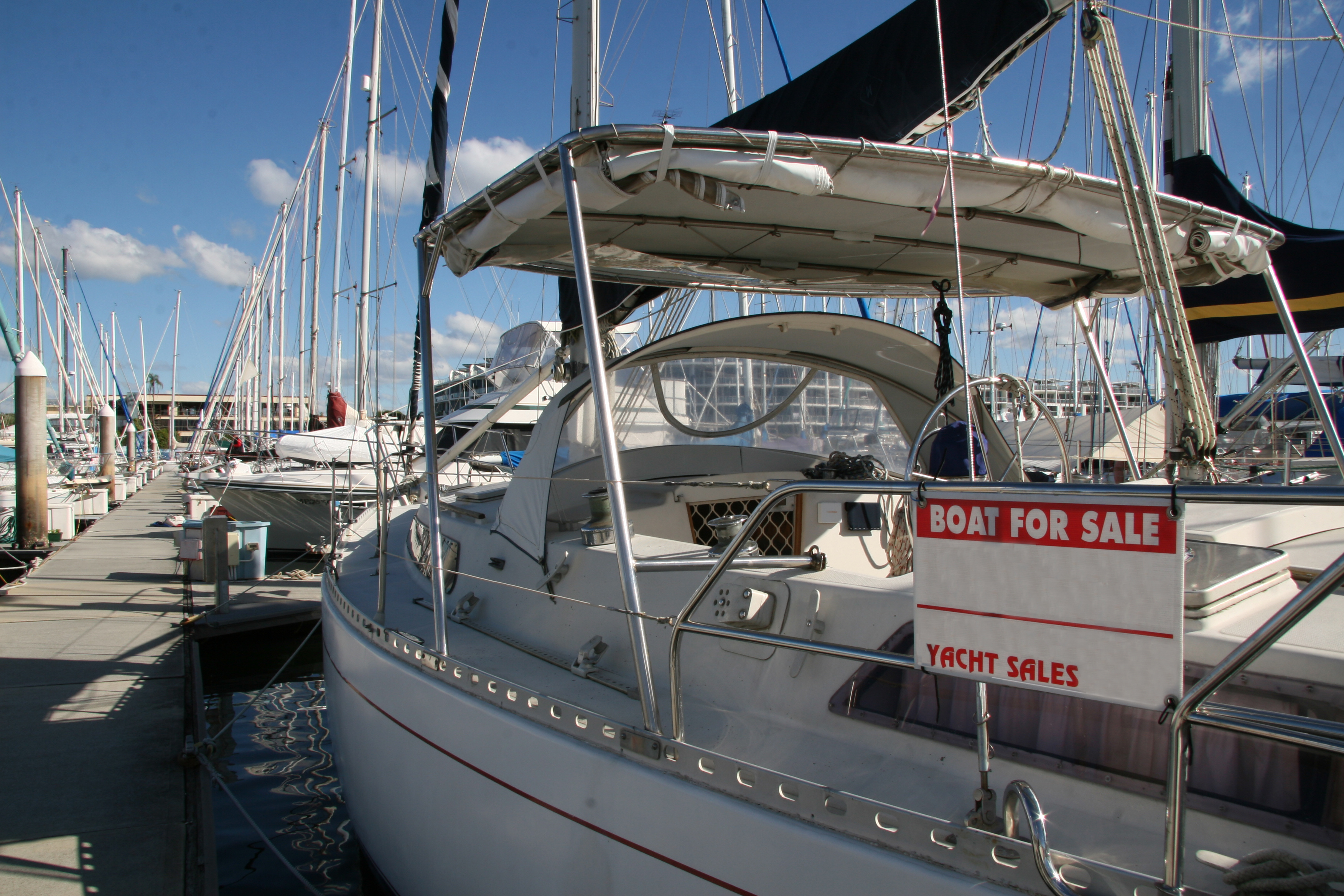 There are a lot of things to look for when you’re buying a used boat. This started out as “Five things to check…” but we decided we didn’t want to get boxed in by a numbered list on this important topic.

The first thing I will say in this article and every part of the series is – plan to get a survey. There is no substitute. Once you agree on a price and sign a purchase agreement, budget the money on an accredited surveyor on any boat more complex than a sailing dinghy. It’s just part of the cost of buying a boat.

But I’m getting ahead of myself, because I’m passionate about surveys. Before you spend a nickel on buying a boat we want to give you a few things to check when you first see it. It’s easy at a first showing to be wowed by a pretty boat with nice lines and overlook a few red flag items that should catch your eye (or nose).

Boats can get a lot of weird smells for a lot of reasons. By their nature, a boat left closed up with have a certain fragrance that has more to do with being near moisture and the water than any real problems. Any savvy boat seller will air the boat out before you get there anyway, so it’s not that “closed boat smell” we’re worried about.

Any boat that smells offensive when you walk on it is a turnoff, but some scents can be masked. Outside of this list of smells, also beware of heavy masking smells when you come to a boat. They may hide something the seller doesn’t want you to catch a whiff of.

A proper head installation won’t smell if you’re standing in the head or near any adjacent cabin space. It won’t permeate the whole boat. You might get a hint if you put your face right next to a hose, but you shouldn’t get it elsewhere.

When you look at a boat pay careful attention for any odors around the heads, and around the holding tank and the space in between. There are several reasons for unpleasant head odors, from blocked vents or saturated hoses to actual leaks of effluent into the cabin space. If you smell something, you need to ask questions.

If you stick your head in the bilge and sniff, it won’t smell great. It’s where everything that drips in the boat ends up, and it’s often not clean. But you shouldn’t smell it when you walk in the boat. Not even faintly. Especially if the boat has already been aired out. Check the water level in the bilge; standing water is often a cause of odor.

Cleaning visible mold and mildew can make a boat look nice, but without a deep application of mildew and mold killer there may still be spores left. And smells. Look for mildew on cloth and cushions, but remember it can grow on headliners and smooth surfaces. Many “smooth” boat surfaces like headliners are textured and hard to clean. Even if you don’t see mildew, if you smell it you will want to look for more evidence.

Many drips and leaks leave signs. Small brown streaks and trains, water stains, delaminated wood, detached headliners and surface materials all can tip you off about leaks on a boat. Leaks aren’t a deal breaker, but know they will mean work and there may be hidden damage. What leaks a little at anchor leaks a lot offshore in foul weather.

Check around the frames of all windows and hatches for telltale water stains. Since leaks travel under closed surfaces, check seams in headliners and near the edge of ceiling surfaces. Also look for bubbling and loose materials.

Chips and dings in a used boat aren’t uncommon, but you want nothing structural or expensive to repair. Crushed fiberglass, bent stanchions, or damaged rub rails may show a boat which had a collision or a few too many close contacts with the pilings.

These are three things to keep in mind when you’re at a showing for a used boat. There are more. In the next part of this series we’ll talk about more things to look at in the engine space, walking the decks, and looking over the rigging.

Good post on buying used. I’d like to get your thoughts in future posts on negotiating with brokers and surveyors. Timing offers in seasonal, launch/haul markets. More on the buying process you alluded to eg p&s, then survey, and so forth. Thanks.

I like what you had to say. Most people do not realize what to look for.

INavX user here… How is the survey done in practice assuming boat needs to be surveyed in water (engine test) and out (below waterline)? Is it reasonable to expect surveyor to make two visits?

Depending on the size of the boat, you may need a surveyor for two days. One day for in water and sea trial, one day for out of the water examination.

When we bought a Hallberg-Rassy 53, the survey was complex enough that it took the better part of four days to go through everything.

A smaller boat though, you can do a short haul in the morning, or haul it before the survey to let it dry out. Then splash it once the out of water parts are done and do the sea trial.

[…] Back in July we started a series on things to look for when buying a used boat. […]

My parents want to buy a used boat for our family to take on a trip to Lake Powell next summer. I appreciate you saying that it is important to check for mold or mildew in hidden sports before buying a used boat. I will be sure to have my parents check for those things before they choose a boat to buy.

[…] a Boat? It’s time to follow up our articles on buying a boat, dealing with a bad survey, and why you should almost always get a survey when buying a boat. This […]