Batteries – the Vexing Problem of the Hour 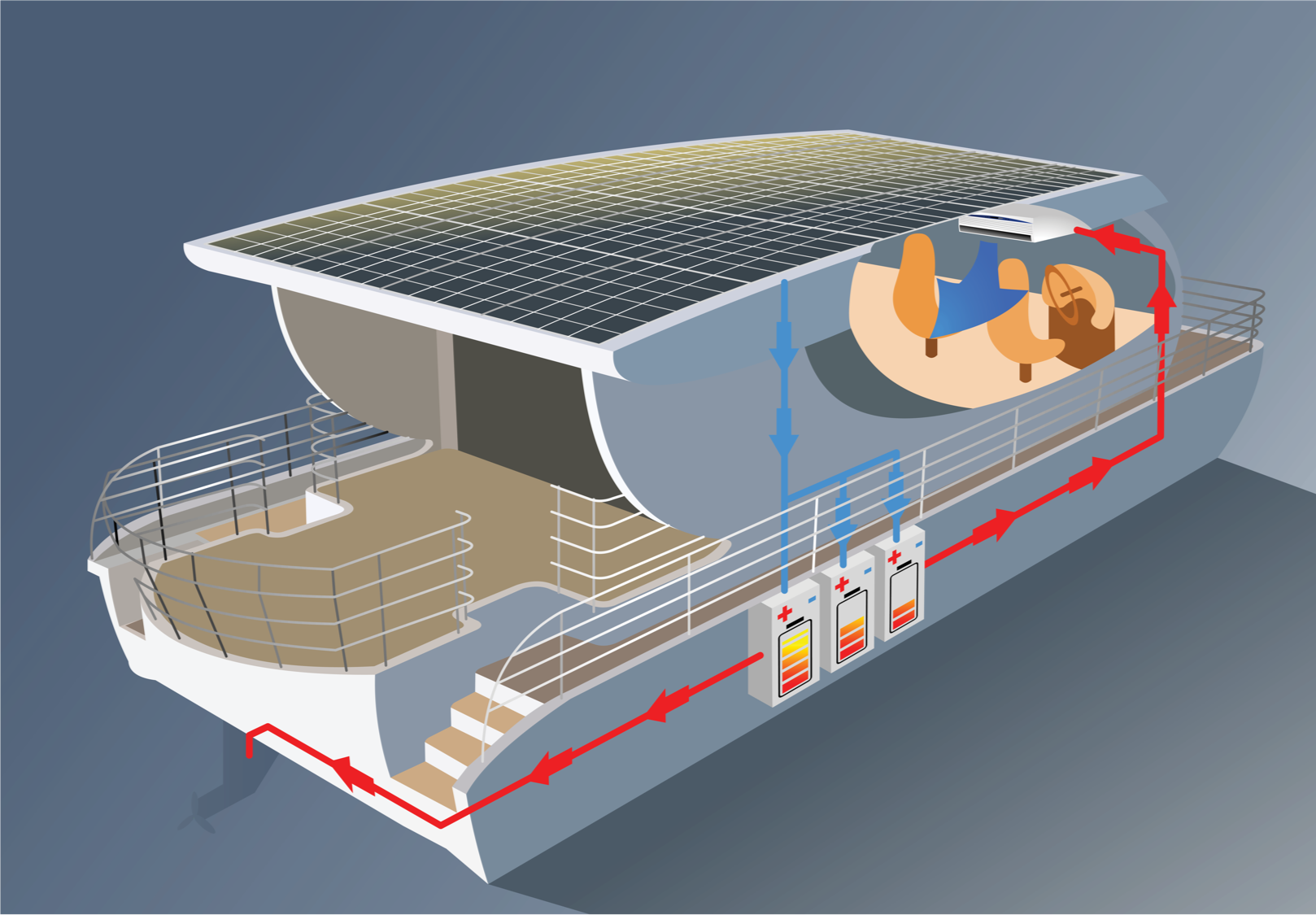 Welcome to my first post as a contributing editor to the iNavX blog!

Our first topic is the all important BATTERY…or as Kathy says “Can you maybe not say the B-word for an hour, please?”

Apologies in advance…things are going to get technical about batteries. If you’re into that, then buckle up because it’s going to get bumpy. It will be a multi-part post, because there’s a lot going on. I’m going to try and keep it readable though, for those of you that don’t get off on tech, gadgets and flashy gew-gaws too.

There’s a lot of background needed to understand why I’m going out on a flyer on a new and very expensive battery technology instead of just buying some new ones just like almost every other boat uses…so why don’t I just admit now this entire post is basically just one techno-folksy digression.

“How does solar work at night? How does wind power work when it is still?”

These are questions which seem to vex many politicians who can not grasp the fundamentals of renewable power. The answer of course is you store the electricity to use when the sun goes down and the wind dies. This presupposes that you are generating more power in a day than you use. If you aren’t, then your home cuts over to the “grid” for backup power. On a boat, we run the generator.

Batteries are the core of a boat’s electrical system. Cruisers have been doing “renewable” and self generating power long before it was cool, even if we’re burning dinosaurs to keep the lights on. For us, solar and wind don’t generate enough power to offset our consumption, so we have to run a generator periodically to fill the batteries up.

The typical cycle is to run the generator for a few hours to top up the batteries. Then for a day or so, we can run off the stored power. If it is windy or sunny, we may go longer with the boost to charging. Or if we’re using less power, such as by being off the boat for the day instead of using laptops and computers for school and writing. Then we get a few more hours without running the generator. It’s fairly simple; the batteries are a tank you keep refilling by making more power.

The Problem of Lead-Acid Technology

This process of storage isn’t a simple and efficient as it sounds. The limiting factor in all of these systems has been energy storage. Lead-Acid batteries have been around since well before the Model T had an option for a self-starter. A simplified explanation is that dissimilar metals in a bath of electrolyte allows current to flow. A battery cell has lead (Pb) and lead dioxide (PbO2) plates bathed in sulfuric acid. Closing a circuit on the terminals on the plates cause current flow by a forward electrolytic chemical reaction. Lead sulfate (PbSO4) forms from the Pb and PbO2 as the electric current flows. Charging reverses the process; the added electricity breaks down the PbSO4 and the lead returns to the plates.

There are some problems with this technology. It requires a LOT of lead plates, which are very heavy. “Deep Cycle” batteries, which are deeply discharged at a slow rate and recharged over and over again, need heavier, thicker plates than “Start” batteries that cars use. Each battery installed on Evenstar now weighs sixty-six pounds. We have sixteen of them, weighing in at  total of 1,056 pounds. This chemical reaction, as it goes forward and backward, leads to sulfation, a buildup up PbSO4 on the plates. It also weakens the plates over time. This leads to a limited number of times that a battery can be charged or discharged.

Certainly, battery technology has improved since Alexander Graham Bell burned himself trying to power his first telephone. Various techniques for suspending the acid in gels (“Gel” batteries), or in absorptive fiberglass matting (“AGM”) have increased life, better charge holding, and reduced risk of acid spills. But each of these improvements is still based on lead and sulfuric acid.

Depth of Discharge, the Dreaded Taper Charge, and Mr. Peukert

A “deep” discharge battery can be discharged to 50% of capacity. A lead-acid battery which holds 100 Amp-hours (the Ah refers to one Amp of current for hour of use; think of it they way you would a gallon of gas) can effectively yield up to 50 Ah of power before it is considered “discharged”. Drawing more power will shorten the life of the battery. So in our case, our 24 Volt, 660Ah main battery bank really has 330Ah of “usable” power before it needs to be recharged.

But it gets worse.

Lead-Acid batteries are limited in how much charge they can take as they get more full. Imagine you are filling a kiddie pool, and you are dim enough to place the pool on top of the hose you are using to fill it. When you start filling the pool it goes quickly, since there is no weight on the hose. As the pool gets more and more full, the hose gets more and more compressed and you can put less water into the pool. By the time you have the pool 90% full you are ready to scream in rage because the fill has dropped to a trickle and the kids are getting all spastic and whiny to get in. Finally to tell the kids to get in the pool when it’s 90% full and like it, because you’re not standing here for four more hours to get it to the top.

Charging Lead-Acid batteries works in a very similar fashion. Charging from 50% up to 75% might go pretty quickly as the batteries accept all the power you give them – all 100Amps of charge are going into the battery! But then the input starts to drop and drop. By 90% charged you’re putting in 10-15 Amps of charge instead of the 100 Amps you started with. If you’re on Evenstar with me, at 90% you’ve still got 66 more Amp-Hours to put in, and the batteries won’t take more than 15A of charge. After 3-4 hours of charging we’re at 90%, and it will take another four hours to get to 100%. That’s nuts, and most cruisers don’t run our generators the extra hours to get that last 10%. The only time we see 100% is in a marina, and that is quite rare.

The problem is, with some battery types like AGMs, every now and then they really NEED that 100% charge. People who spend their lives at anchor like we do don’t have enough opportunity to do that, and it hurts our battery life. But the other big takeaway is that the REAL usable range of your batteries is from charging them from 50% to 90%. You only really get about 40% of your rated capacity in daily usable power. For use, that’s 40% x 660 = 264 Amp-Hours from our giant bank of battery.

The Amp-Hour rating of a battery is calculated by the number of Amps it takes to draw the battery to 0% over twenty hours. That’s a fairly slow rate of discharge – 5% of the batteries capacity. But…as the rate of power draw increases, the efficiency of the power usage decreases. So if I drain a 100Ah battery at 5A (5% of capacity of “C”), it takes 20 hours to drain. If I drain it at 50Ah, it should take two hours, right?

Wrong. It takes much less than two hours. How much less depends on your battery, and can be estimated by this formula:

Also known as Peukert’s Law, a detailed explanation of which is beyond the scope of this already careening-of-scope and rambling blog post. Suffice it to say, if you use your 100A battery to line a single lightbulb it will actually give you more than 50A of effective power since the draw is so light. But the draw is never that light. If you spend a lot of time running the microwave and jumping up and down on the bow thruster, you will take a lot less than 50A. Somewhere in between lies reality.

So what’s the point of this essay?

It’s background, for the next one. The rationale for ripping apart the boat and dropping an outrageous amount of money on battery technology than many people are still afraid will make their cell phones explode.

The point is simple: after two years, the AGM Lead-Acid batteries we installed in New Zealand are dying. We’d hoped to get 4-5 years out of them, but that just isn’t happening. I can give you another 1,500 words on WHY they’re only lasting two years, but that wouldn’t do much more than annoy you. The salient point is we got three years out of the batteries we first installed, and only two years from the second set. That’s about $11,000 worth of batteries in five years. On a per year basis, that is a pretty expensive piece of disposable equipment.

Something has to change.

What is going to change is the technology. We’ve installed our last Lead-Acid batteries in our house bank. We’re moving to Lithium.

Next up: The Wonder and Terror of Lithium Batteries

Try to contain your enthusiasm.

5 Responses to “Batteries – the Vexing Problem of the Hour”

And, I have often heard as well as experienced, AGM’s have a tendency to “die”, not dwindle away. Mine were showing fine and within 24 hours would not hold any charge. Then the second battery 24 hours later again died. No more AGM’s for me.

As long time user of iNsvX and about to install lithium ion batteries in my catboat, the related Blog was very timely and informative. Thanks!

Have you looked into the Firefly Oasis batteries? They claim that repeated 80% charge levels wont cause sulfating due to their carbon-foam plate structure.

Rolls surette batteries. They are fabulous